We don’t want to do business with a place that supports fascism and neo-nazis and encourages hate speech.  The name of your venue calls to mind the Alhambra decree, otherwise known as the edict of expulsion, the edict that expelled Jewish people from Spain.

Death in June, the band playing at your venue on Saturday, Nov 8th, is very offensive–fascist, racist and anti-Semitic.  They have been banned in many countries and other venues refuse to book them because of the high level of white supremacists and neo-nazis in their fan base.  Our community does not support Nazi symbolism even if the musicians claim it is ironic.  This band creates a comfortable place for white supremacists to gather and hear music that promotes their cause –please cancel this show on Saturday Nov 8th, and show your willingness to stand against racism.

Thank you for doing your part!!! 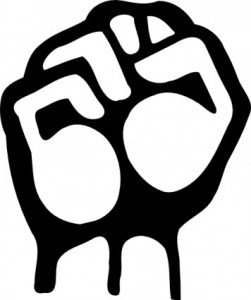 Music has saved my life a thousand times and ignited my political leanings.   It happened to my 12 year old self with eyes squeezed shut, sprawled out on my bed with walkman at ear splitting volume listening to U2 singing “Sunday Bloody Sunday”.  It happened to my 16 year old self in a chilly garage huddled around a cheap amplifier with Sid Vicious screaming his punk prayers.  And then there was my 20 year old self watching Ani DiFranco bounce all over the stage, playing her guitar strenuously, singing directly to me about abortion, corporate rule and queer love; everything that no one would talk about.

The adventure that happens in our brain when we hear music is one of the most fascinating, psychedelic facts about humans.  Music matters.  Musicians have the power to shape and speak and make the most freaky, experimental, relevant art that they can muster, then wake up the next day and try again.

Musicians also have the power to distort, incite and recruit.  The first time I heard white supremacist music, my teenage self was drinking Milwaukie’s Best with my co-worker from the pizza place.  We were in a suburban basement of someone’s out-of-town parents outside Louisville, Kentucky.  The skinheads showed up.  They brought a terrifying frost with them, but nothing changed at the party.  No one asked them to leave, though I saw a few people slip out the back door.  Elena and I couldn’t find our ride home.  The skinheads put on music that seemed like our usual punk rock, but I heard lyrics that left me dirty on the inside.  I felt even dirtier when I noticed the people who hadn’t left the party were all white and either head bobbing to the music or oblivious.

“What do you suggest?”

I had nothing.  Nothing was enough; nothing seemed possible.  I didn’t know a soul except Elena.  Each of the skinheads outweighed me by a hundred pounds.  We weren’t even supposed to be at that party, our other plans had fallen through.  Thank goodness LaShonda had decided at the last minute not to come out with us that night.  I alternated between heavy shame and slithering fear until we located our ride and got the hell out of there.  I never wanted to be caught like that again, speechless and frozen, knowing something was so dreadfully wrong but unable to think of anything to do.

White supremacists are not always as obvious these days.  They recruit disaffected white folks, often working class people looking for someone to blame for the inability to either access education or succeed at low wage jobs.  They actively proselytize through music and social media.  They put up stickers on the back of street signs with websites and contact information so people who wait for the bus can find them.  They use Nazi symbolism and study the Third Reich.  They have conventions and conferences about white flight and the ways that people of color are threatening white identity.  They do it where you live.

Here in Portland, we have a very low percentage of the population that is not white.  We are consistently written about as one of America’s Best Places to Live, Most Livable City, Green and Vibrant, Progressive and Visionary.  Portland does have many of those qualities.  But without discounting the strong communities of color and their effective leaders who have resided in Portland for many years, I say there is a disproportionate number of white folks in this town.  We are diverse in our age, class, gender, orientation, abilities, religious traditions and ethnicities, but a whole lot of us look white and it affects how we are treated in the world.  Feel free to research the next two things I say.

That is not an accident.

If we value living in a more diverse community, those of us who have some privilege need to make sure the neo-nazis are not comfortable in our town.  White supremacists want to be where people who think they need them can find them.  They want to be where the majority of people don’t bother worrying about racial justice because it doesn’t really affect them.  They want to organize in places where people are polite and won’t mention it or won’t know what to do to stop them.

There is a band of neofolk musicians called Death in June, who have been around since about 1980.  They derived their name from “The Night of Long Knives” when Adolf Hitler executed three Nazi officers who opposed his support of industrial capitalists and felt fascism should be more, well, socialist in nature.  They consistently utilize Nazi symbols to promote their band; they have recorded fascist anthems.  They can’t get gigs in 7 European countries.  They are playing at the Alhambra Theater in Portland on Saturday 11/8/14 at 8:30, doors open at 7:30p.  The owners who booked the shows feel that it is their artistic right to use symbolism from the SS army that brought us the Holocaust and lyrics that support fascist thought, that it doesn’t matter what kind of safe space that makes for neo-nazis to gather.  Death In June is banned from several countries and most venues in Oregon won’t book them, but the Alhambra welcomed them twice this year.  The band loves the negative attention and say, that by using these Nazi symbols, they are being ironic.

The Holocaust is not ironic, neither are lynchings, police brutality, rape or slavery.  These things didn’t happen once upon a time, they just happened, they are happening, they will happen until we decide to make a real change.

This is a brave article from a man who attended a Death in June concert in Baltimore and felt dirty when he realized the intensity of the white supremacist presence in their fan base.  http://www.onepeoplesproject.com/index.php/en/arts-culture/music/1257-neofolk-or-neovolk-ones-personal-take-on-the-death-in-june-concert-in-baltimore-md

I believe in music, it’s a vital part of my religion and when people use it in service to hate, it is a violation.  I believe in Portland, in the vision for a green and progressive visionary town of people with strange hobbies and wild ideas and various identities.  It hurts that people want to use Portland in service to hate.  I hope that we will not be the oblivious, head bobbing white folks that would allow that to happen.

I hope to see you in front of the Alhambra Theatre 4811 SE Hawthorne at 7:30pm if you agree and have some time to make a stand.  I plan to hold a sign that says “Alhambra welcomes Nazis” or maybe I will make five signs.  You could be a Women In Black or a fake paparazzi snapping pictures of concert goers for the Nazi News or someone passing out homemade flyers or just a body who says “this truly sucks and I don’t want this band to play at a venue in my town.”  Or maybe you are someone who will block the door or the entire street with a parade so no one can attend the show.  You can do what calls you to do in order to make your stand.  I will stand there with you.  I believe our values come through our words and actions.  I believe we need to stand for the world we want.

Here is more information from the Rose City Antifa who alerted me to this concert:  http://rosecityantifa.weebly.com/home/death-in-june-plans-return-to-portlands-alhambra-theatre-canary-in-coal-mine-for-hipster-racism-and-gentrification